The Importance of Cleanroom Airflow 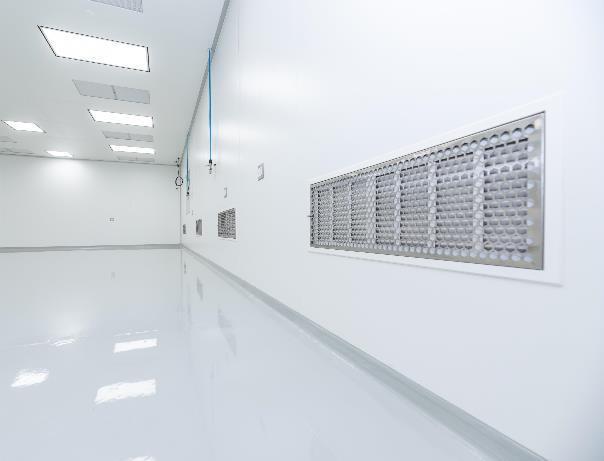 Any controlled environment or cleanroom is expected to maintain a contamination free, conditioned and consistent air flow. Maintaining consistent cleanroom airflow is essential to keep these spaces compliant with industry standards towards their intended research or manufacturing ends. There are multiple components to effective cleanroom strategy, but properly implementing and using an air filter system is one of the most important & critical parts.

Poor placement or installation of any element within a controlled environment or cleanroom could potentially interfere with proper airflow or ventilation system. Therefore, it is important to have a good working knowledge of the types of considerations to keep in mind while designing, operating, or even just carrying out tasks within a cleanroom. Let’s walk through some of these considerations as well as what happens when they are not properly addressed.

Air filtration should target impurities as well as odors.

Proper airflow ensures that all air meets the filters that will help keep it clean before it reaches to any controlled space.

Particulate matter can be airborne to spread contamination. These types of impurities can include everything from bacteria through dust. HEPA (highly efficient particulate air) filters are popular even in public consumer settings, and can serve as a basic tool even in the cleanroom; but other filters exist that may be used in parallel for maximum particulate filtration, such as ultra-low particulate air (ULPA) filters with highest MERV rating. Normally filter efficiency is gauged with MERV rating. Higher the number better the filtration.

But particles are not the only contaminants. Odors and fumes are matters of concern in cleanrooms as well, and can signal opportunities for cross-contamination, exposure, and even long-term erosion. Adsorption via carbon filters is the single most common way in which fumes, vapors, and odors are removed across all industries, from pharmaceutical through aerospace engineering. Strategic placement throughout a cleanroom can render even small amounts of activated carbon highly effective at such filtration, but once again, its efficacy is dictated by proper air flow throughout the space.

Air should be conditioned for both temperature and humidity

In order for temperature and humidity to be maintained consistently, cleanroom airflow must be optimized. Why do humidity and temperature matter?

There are various reasons why humidity needs to be regulated in cleanroom. On a larger scale, gross humidity needs to be adjusted to prevent growth and contamination with impurities such as mold and mildew, or the accumulation of bacteria in HVAC ducts. But even when humidity is relatively controlled on a macroscopic scale, different industries will have specific needs based on the applications at hand. Relative Humidity (RH) levels in cleanrooms are closely monitored, and SOPs dictate to great detail what is considered to be an acceptable range.

For example, in semiconductor clean rooms, many hygroscopic polymers are used that rapidly absorb moisture. If left unchecked, too much moisture can easily be drawn in and compromise the structural integrity of the boards which now require longer bake-out times; finished layers may still absorb water and experience changes in their long-term functionality; or they may even fall prey to corrosion.

For pharmaceutical cleanrooms, the humidity is playing vital role for solid dost / powder products. If the humidity is not controlled, the product is not made as per required specifications.

Temperature is also implicated in a wide range of controlled applications. Some measuring equipment requires specific temperatures for optimal functioning. Certain compounds require particular temperatures for optimal handling. Generally, a temperature of 21 degrees Celsius is considered to be ideal, with an allowed fluctuation of two degrees. Many industry experts point to the importance of being consistent with temperature, and keeping an eye on staff comfort levels. The more comfortable a team is, the less likely they are to release particles via sweat or shivering—and the less likely cross-contamination is.

Many industries are using BAS with monitoring system to ensure the conditioning parameter stays with in defined parameters and it alarms if goes off. With appropriate quantity of air flow and well designed ventilation system, the required parameter can be maintained.

One potential application for the CFD analysis is in the selection of the optimal air flow pattern for the cleanroom, to keep air consistently moving throughout the space so that it can carry the intended climate conditions while also regularly and equitably encountering the cleanroom’s various filters. There are two primary airflow patterns to consider.

When a cleanroom uses laminar airflow, that means that air is flowing in a straight path with no obstacles. Usually, this type of cleanroom airflow is observed in facilities using laminar hoods that drive air straight down through HEPA filters, and leverage the non-shedding nature of materials like stainless steel in order to minimize airborne particles.

Turbulent airflow moves air in every direction randomly, and so laminar filters alone would be inadequate—they would only capture the particles traveling in the same direction as their filter. Non-specific velocity filters are used here to augment the particle filtration of the laminar filters, and eliminate airborne contaminants. Usually, this type of airflow is used in industries that are ISO-6 and higher, and do not require the heavy investment into laminar cleanroom airflow and filtration.

The difference between these two types of airflows is what happens to air once it has passed through a room. In a recirculating room, filtered air is brought back into the room; in single-pass air flow, it is sent outside of the room. Usually, if a very specific temperature and humidity setting is needed for a room, it is far simpler to recirculate the air and maintain the conditioning.

Some applications like class1 div 2 area where flammable liquids are being processed, the single pass air flow is desired to protect air handling system by not having any vapor carryover and become source of ignition to open electrical components. Keeping these considerations in mind while designing the cleanroom airflow all the way through to its coving is important for ensuring an optimized, compliant set-up. At the same time, being comfortable walking through these considerations can also help with educating team members so that they can help maintain best practices.

Staying compliant with industry guidelines helps a cleanroom and its associated laboratory facilities remain open and functional, with high quality outcomes and the ability to withstand any audit.

Regulatory bodies like FDA, Health Canada, EU are insisting to have low level return air grill for returning the air back to AHU unit. Air supply from ceiling and return from bottom of the wall, can provide better ventilation system in terms of removal of particulates. ISO classification can be achieved by using appropriate level of air changes inside the provided controlled environment space.

No different than any other airflow, cleanroom airflow follows foundational principles in physics—particularly in fluid mechanics. These principles lend themselves to the establishment of virtual models, where parameters can be adjusted to test different outcomes. These models can therefore be used to confirm whether cleanroom airflow in a given space is truly set to the best possible conditions.

Facilities that do not leverage such tools in their design run a very high risk of blindness to potential problems. Some of these problems might be more acute, but they might also take a long time to demonstrate effects—which also might make them more difficult and costly to resolve.

Additionally, the CFD can provide visualization on optimization of air handling system for their capacity. Many times, the mechanical designers use larger factor of safety to design heating & cooling requirement which can result in overkill design and costlier units. CFD simulation can provide optimum designs and lend cost benefits.

The Importance of Cleanroom Airflow

What To Look For In Cleanroom Laboratory Furniture

How to Prevent Cleanroom Contamination

Cannabis – The Next Big Industrial Step for ACH Engineering